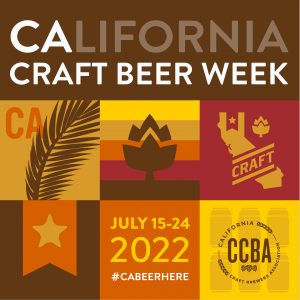 The collaborative spirit of California’s craft beer industry led participants to bring CA Craft Beer Week back this summer, to spotlight small, craft-centric businesses in Californian’s backyards, producing local craft products, keeping revenue within local economies, creating local jobs, contributing to local causes, and, as important, providing places and rebuilding connections within their communities to assist recovery and renewal of towns and cities across the state. Making its return possible is Whole Foods Market, back again in 2022 as title/name sponsor.

Local craft beer scenes are front and center throughout CCBW, with consumers able to drill down to a multitude of releases and events in each corner of the state via cacraftbeerweek.com. Initial listings are now live; many more are on the way.

Alongside activities in local taprooms and craft venues, CCBW will be showcasing high-profile releases including the CCBA Brewers Collaboration Beer. The funds raised from this special release will help local breweries in your neighborhood, and throughout the state, continue to grow and thrive. Learn more here. The program features a “who’s who” of California craft breweries, from north to south.

More cool collaborations, events and special releases will be on tap for CCBW releases, like Sun Supreme, a Coffee Blonde Ale from Brouwerij West featuring Groundwork Coffee; Electrohop, a West Coast IPA brewed to celebrate Beachwood BBQ & Brewing’s 11th anniversary; and Errybody & Their Mama Beer Fest, a collaboration between The Rare Barrel and Hella Coastal on July 23 in Berkeley, Calif.

California is the birthplace of the American craft brewing movement with more than 1150 breweries in operation across the state. The California brewing industry continues to lead the nation in innovation, economic impact and job creation. With new breweries continuing to open in California, craft beer supports more than 65,000 jobs statewide and contributes $9.66 billion annually to the state economy.