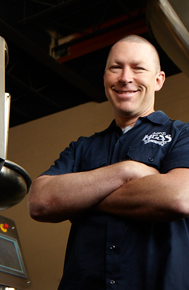 Mike Hess is founder, proprietor and CBO of Mike Hess Brewing. He began as a home brewer in 1995 in his Philadelphia apartment. When he moved to San Diego in 2001, he built a 10 gallon, 3-tier gravity system. Mike opened up the original Hess in 2010 to try his hand in the world of craft beer, but more importantly to prove or disprove the concept of the nano-brewery as a viable business. Mike is the visionary behind the North Park location, which opened in 2013, wishing to create a unique brewery experience that showcases not just the equipment, but the brewers themselves, as they work to create delicious artisanal beers in full view of the brewery’s visitors