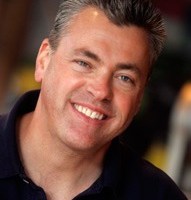 Nico manages all operations and business development for the 21st Amendment Brewery beer production and restaurant operations. He comes from a background of more than 25 years in the restaurant and craft beer business as a manager, beer writer and avid brewer and consultant. He co-founded the 21st Amendment Brewery with business partner Shaun O’Sullivan in 2000 and has helped grow the business to include a beer production division that is currently one of the fastest growing craft breweries in America. In addition to great craft beer, Nico enjoys an occasional good tequila, cigar and game of Texas Hold ‘em. If you’re ever at a beer festival and see a guy with a big goofy watermelon hat, vest and eyeglasses, that’s Nico. Go say hello. Nico lives in the San Francisco bay area with his wife Dana, a trauma surgeon, two daughters and menagerie of pets.