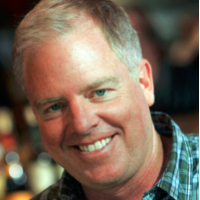 Shaun is the Co-Founder/Brewmaster and the heart and soul of the 21st Amendment Brewery.  Shaun started his brewing beginnings at the great Triple Rock Brewery in Berkeley, CA. He has also brewed in San Francisco at Steelhead Brewery and 20 Tank Brewery. Shaun likes to talk and talk about beer. Shaun jumped around before finding beer. Prior to brewing Shaun was a photojournalist for a local weekly in Los Angeles shooting political and punk rock club photograph and was once offered a position in the kitchen at Chez Panisse in Berkeley. Has worked as a producer for Cable News Network and as a corporate law clerk at a large New York law firm’s office in Los Angeles. Back then he was in the process of going through the hoops and hurdles of applying to either business school or law school when he jumped ship, traded in his suits for boots and was saved by beer! Hallelujah. He enjoys being a father to his amazing son, loves to travel, does a lot of that, along with cooking. Enjoys his Great Pyrenees dog, Snickers and his cat Oliver. Shaun graduated from the University of California, Los Angeles with a liberal arts degree but don’t hold that against him.